(In case you can’t tell from the title, I wrote this post a few months ago and somehow it never made it up… Even though it’s a bit late, I figured you might still enjoy it.)

About a month ago was Ganesh Chaturthi, a Hindu festival to celebrate the elephant-headed god Ganesh. After several days of special worship, the festival concludes with a procession to the river to immerse the idols of Ganesh. This procession includes singing, dancing, and throwing red, purple, and pink paint. At one point, someone threw some paint at me when I was laughing, and I ended up with purple teeth.

Our campus is on top of a hill, and it took quite a while to make it to the bottom because the cart carrying our staff’s Ganesh kept getting stuck. When we did finally make it, we joined many of the villagers also headed to the river. It was fascinating to watch the immersion ritual when all the Ganesh idols ranging in sizes from 6 inches to several feet tall were put into the river with flowers and candles. Afterwards, there were sweets to celebrate, and I somehow ended up a large chunk of coconut from a very friendly old woman. 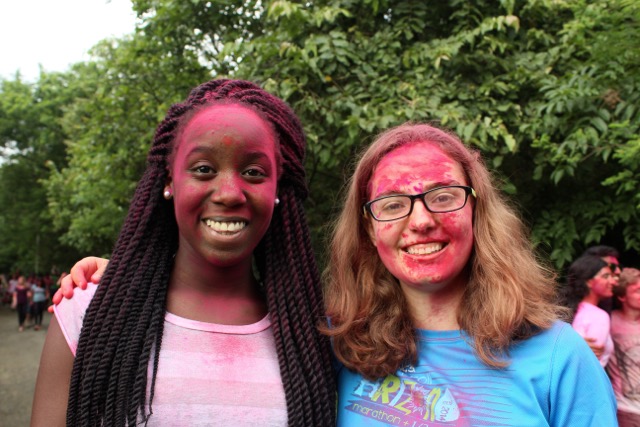 Me and Adala from Nairobi. (Thanks Alex!)

To get a brief introduction to some of my classmates, including many of the people in the above photo, check out this super awesome  video. We watched it the first week we arrived as an introduction to our class. At the time, it was exciting to see so many diverse people. It’s strange now to watch it again and realize that I actually know them. They’re more than just names and faces with all kinds of nationalities and backgrounds; they’re my classmates, roommates, and friends.

A few weeks ago I had homestays, which is when all first-year students spend an evening and a night with a family in one of the villages in the valley. I was lucky enough to be with another MUWCI student who speaks Hindi, though my host sister Pratiksha spoke English very well. We met Pratiksha at her school, a few miles walk from MUWCI. Both her parents are teachers, and they live very near the school. They have a two room house with one bed, electricity, and no running water. Pratiksha’s mother cooked dinner for us-  paneer butter masala, dal, and roti. By far the best food I’ve had here so far!

Pratiksha took us around to met some of her friends and show us the local temple. At one point, we had to scramble into some bushes to avoid an angry water buffalo running down the road. The three of us slept on the floor on top of a mat and a few blankets. Pratiksha “slept in” to avoid disturbing us, but apparently she usually gets up around 4:30 AM to study for a few hours before school.

Sanjana, Pratiksha, and me laughing at our poor selfie-taking abilities.

In the morning, Sanjana and I unsuccessfully attempted to help with the daily routine of collecting water from the communal well and boiling it. I’ve cooked a few times here, and while it takes significantly more effort for me to make anything here than it would at home, I now also feel deeply grateful when I can use running water that I can confidently know is clean.

This week is what is called Experience India week. Instead of classes, we all travel to different parts of India. I leave for Kolkata (a.k.a Calcutta) in a few hours, where I’ll be learning about Indian classical music and dance and how it’s changed over the past several centuries. I’m looking forward to some great adventures!

One thought on “October Already?”